Marriage
**This post may contain affiliate links, which means if you purchase something through one of my links, I may receive a small commission with no extra cost to you. For more information, see my disclosures here.

A few years ago I learned an important lesson that’s changed everything about happiness in my marriage. Marriage isn’t easy, but learning this truth definitely makes it easier!

Let me explain. A few years back, I found myself getting frustrated with my husband often. I felt like I was putting so much effort into making him happy, yet he didn’t seem to be doing the same thing. Which made me angry. Which then made everything he did annoying–or worse. He’d leave his socks on the floor and suddenly that tiny action felt like a personal attack, like his way of saying, “I don’t care about you.” It was miserable.

But the problem wasn’t with him. Not at all. He was (and is!) an amazing husband.

The problem was with me.

Through all this, I realized something important.

I felt like I was putting more effort into our marriage because I was judging myself based off of my intentions and judging my husband based off of his actions.

I think this is a problem in a lot of relationships because here’s the thing: We know the intent of our own hearts. We know our thoughts, our desires, the things we want to do but never get around to doing.

But all we know about others is their words and actions.

For instance, I knew that I thought about how much I loved my husband several times a day (even though I only told him once or twice). I knew I wanted to write him those “Open When” love letters (where you write a series of letters: one to open when you’re sad, one when you’re happy, one when you’re lonely, etc.)–even though I never did it. I intended to do it, so I was “a great wife putting a ton of effort into the marriage”.

I knew that I worried about him and wondered how I could make his day-to-day life easier, even though no forward motion was taken on those desires. Because I have a full-view of my love for him, I knew all this.

But I’m unable to see these things from his point-of-view, so I was judging our love on an uneven scale.

Not only was it unfair, it was a pretty miserable way to live. The whole idea of tallying points in marriage is a bad idea to begin with, but when you throw in the fact that it’s impossible to tally evenly, it makes it even worse. Marriage isn’t a game, so why are we keeping score?

Now when my husband leaves his socks on the floor, I know it’s because he’s tired and just wants to sit on the couch. Duh! I know that even though he only tells me he loves me a couple times a day, he thinks it more. I know that just because he doesn’t do anything for me when I’m having a stressful day doesn’t mean he doesn’t want to or didn’t think about it or doesn’t want to make my load a little lighter. Of course he does! He’s my husband (and the most amazing one at that 😍!), but he’s also human. Just like me.

Just Do Your Best

At times I forget this truth and revert to my old way of thinking, but the important part is that I’m trying my best. I’m not a perfect spouse and I’m never going to be one. And there’s no way I’ll ever be able to do all things I want to do for him or to show him just how much I really love and care about him. I’ve got kids and a house and work and life that get in the way of that.

And so does he. But that doesn’t lessen our love or make our marriage less than. In fact, it sort of makes it beautiful.

So if you’re tallying points, stop. It’s never going to make you happy. And remember that you’re never going to be able to see the full picture behind your spouse. You’ll never be able to see all his thoughts and desires and intentions. And that’s okay. Get rid of that uneven scale and focus on your love. That’s the only way it’ll ever grow.

And if you mess up, it’s okay. Say, “I love you,” and try again. That’s the beauty of being human–learning and growing and messing up and trying again. It’s perfectly imperfect. 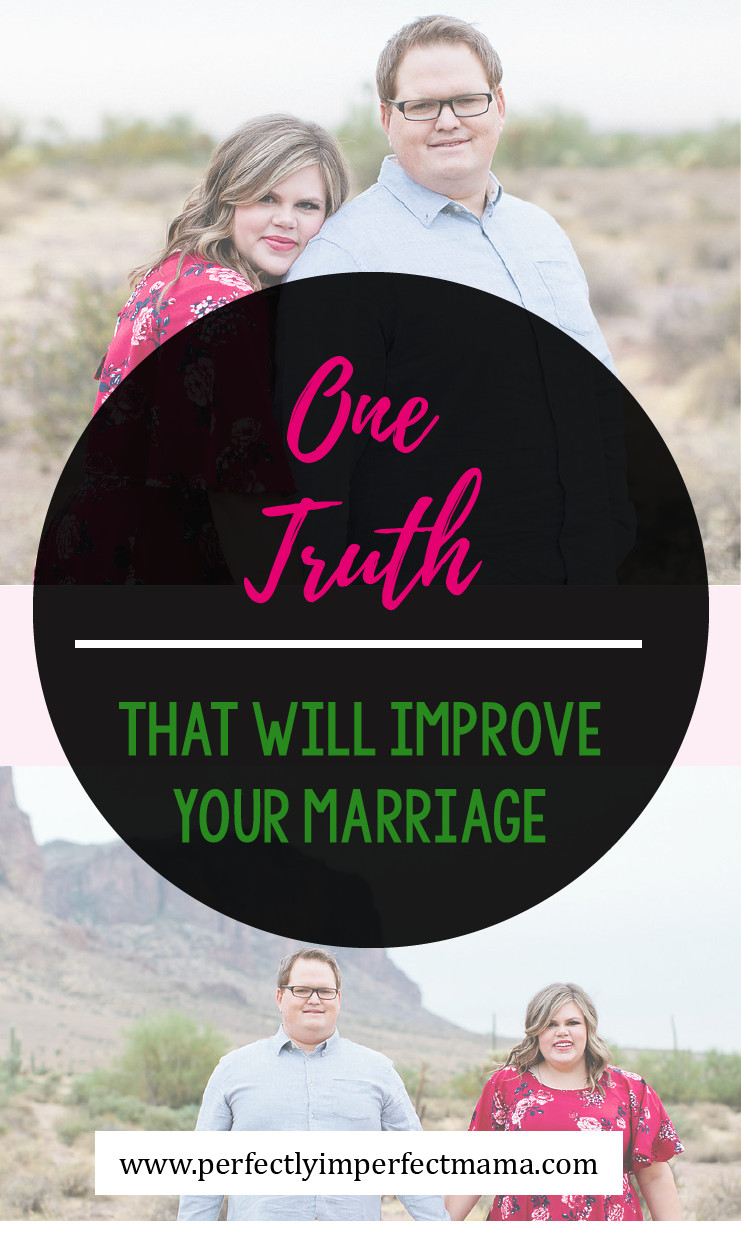 Britney is a wife and mom with a passion for helping other women see the good inside of them. She loves podcasts, polka dots, and dancing around the kitchen with her family.
February 7, 2018 by Color My Happy | 3 Comments

3 comments on “One Truth That Will Improve Your Marriage”

This site uses Akismet to reduce spam. Learn how your comment data is processed.

There are thousands of things you can do next week

It feels REALLY good to cross something off your t

Beating yourself up over not doing enough doesn’

Only add things to your daily to-do list that real

Drop a 😅 below if you ever feel this way! A fe

Color My Happy is a participant in the Amazon Services LLC Associates Program, an affiliate advertising program designed to provide a means for sites to earn advertising fees by advertising and linking to amazon.com. As an Amazon Associate I earn from qualifying purchases.

This website uses cookies to improve your experience while you navigate through the website. Out of these, the cookies that are categorized as necessary are stored on your browser as they are essential for the working of basic functionalities of the website. We also use third-party cookies that help us analyze and understand how you use this website. These cookies will be stored in your browser only with your consent. You also have the option to opt-out of these cookies. But opting out of some of these cookies may affect your browsing experience.
Necessary Always Enabled
Necessary cookies are absolutely essential for the website to function properly. This category only includes cookies that ensures basic functionalities and security features of the website. These cookies do not store any personal information.
Non-necessary
Any cookies that may not be particularly necessary for the website to function and is used specifically to collect user personal data via analytics, ads, other embedded contents are termed as non-necessary cookies. It is mandatory to procure user consent prior to running these cookies on your website.
SAVE & ACCEPT